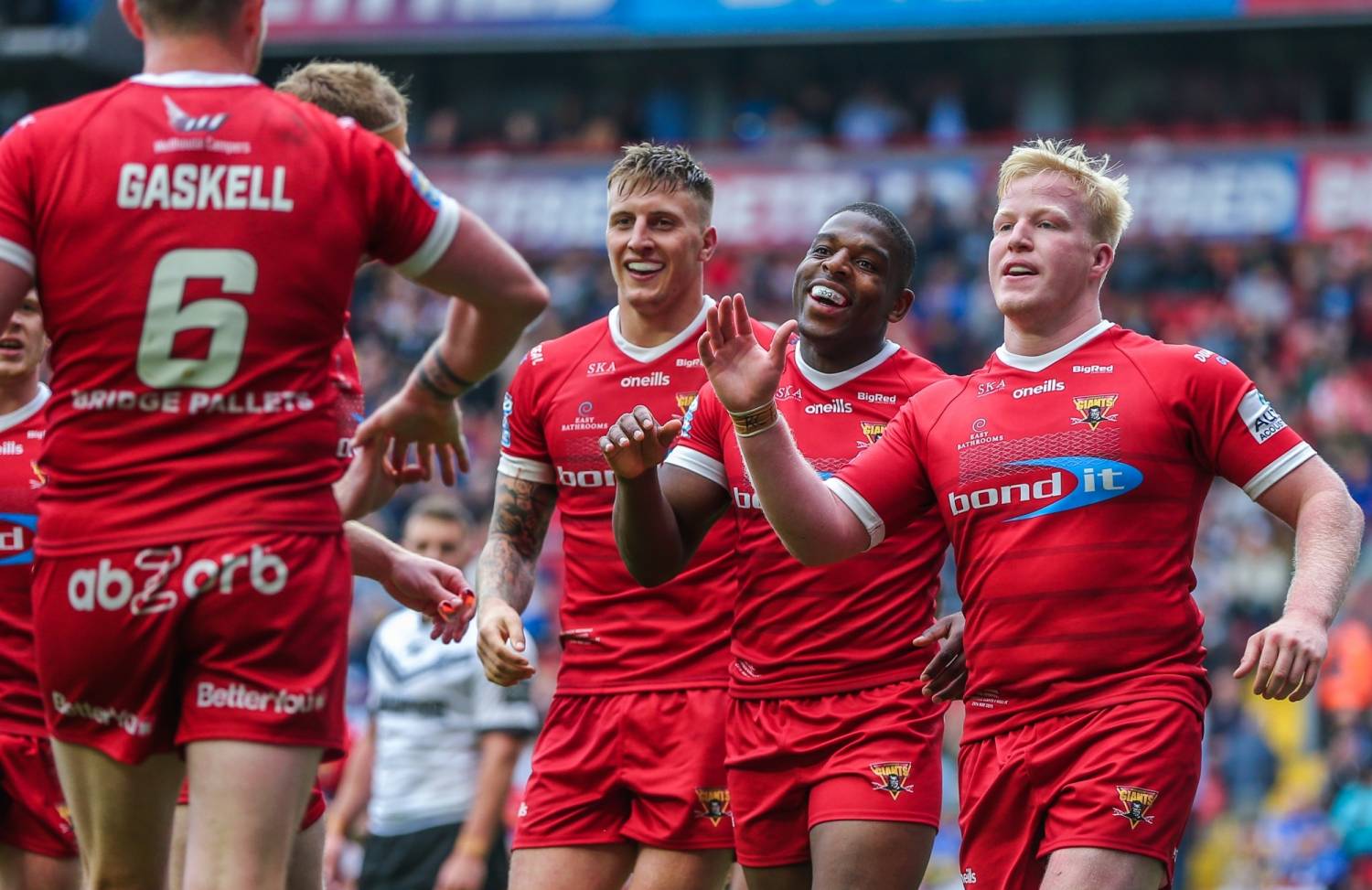 This year’s Super League Magic Weekend was being held for the first time at the home of Liverpool F C Anfield Stadium with the Giants drawn to play Hull FC in the second match of the weekend. There was one change from the team which defeated  Hull KR last time out, Alex Mellor replaced Sam Hewitt. Hull welcomed back Josh Bowden after after a long injury absence.

Hull started strongly after the Giants had lost possession early in the tackle count but found the Giants defence in uncompromising mood. In the Giants first meaningful attack on 8 minutes they took the lead. Oliver Russell’s kick to the in goal area bounced away from Hull fullback Jamie Shaul and Joe Wardle touched down for a try, Oliver Russell adding the extras.

The Giants then had to withstand a spell of intense pressure after failure to deal with a high kick followed by a Sneyd 40/20, the defence being exemplary. When the Giants then attacked Jermaine McGillvary nearly got over in the right corner, a goal line drop out being forced and on 19 minutes the Giants were over again, a strong Suaia Matagi burst being followed by a move on the left where McIntosh, Oliver Russell, and Innes Senior combined for Jake Wardle to touch down wide out on the left, Oliver Russell missing the conversion.

As Hull sought to respond a high Sneyd kick led to a goal line drop out but again the defence held firm and handling errors by both teams  meant that no further scores came until the 27th minute when a penalty conceded by Hull led to an Adam O’Brien try by the posts, Oliver Russell adding the extras. By the 35th minute it got worse for Hull with another Giants try passing on the left putting Darnell McIntosh over and although Oliver Russell missed the conversion 2 minutes later he dropped a goal to take the Giants score to 21 points. Hull got a penalty goal on the half time hooter to open their account but the half had belonged almost exclusively to the Giants, a dominant display being rewarded with a lead of 19 points.

The second half began with a good set of 6 tackles by the Giants forcing a goal line drop out and with only 3 minutes gone the lead was extended Adam O'Brien going over for his second try of the afternoon from close range with Oliver Russell adding the extras. A stoppage for a head knock to Jake Wardle leading to his withdrawal for an assessment, Aaron Murphy replacing him.

Hull then had a spell on attack thwarted by excellent defence before on 56 minutes the Giants ran in another try Darnell McIntosh going over to the right of the posts Oliver Russell adding the extras. The remainder of the game saw the Giants totally dominant running in further tries with Hull demoralised, Alex Mellor went over to the right of the posts followed by Jermaine McGillvary, Aaron Mellor and finally Jermaine McGillvary again, Oliver Russell converting 3 of the ties to take the Giants to their highest score at a Magic Weekend  of 55 points and move them up a place to 8th in the Super League standings.

It had been an afternoon to remember for the Giants and their supporters. Standards are being set which should be good for the future. The next Super League Fixture comes round on Friday 7 June 2019 at Castleford Tigers kick off 7.45pm.

Man of the Match Adam O’Brien