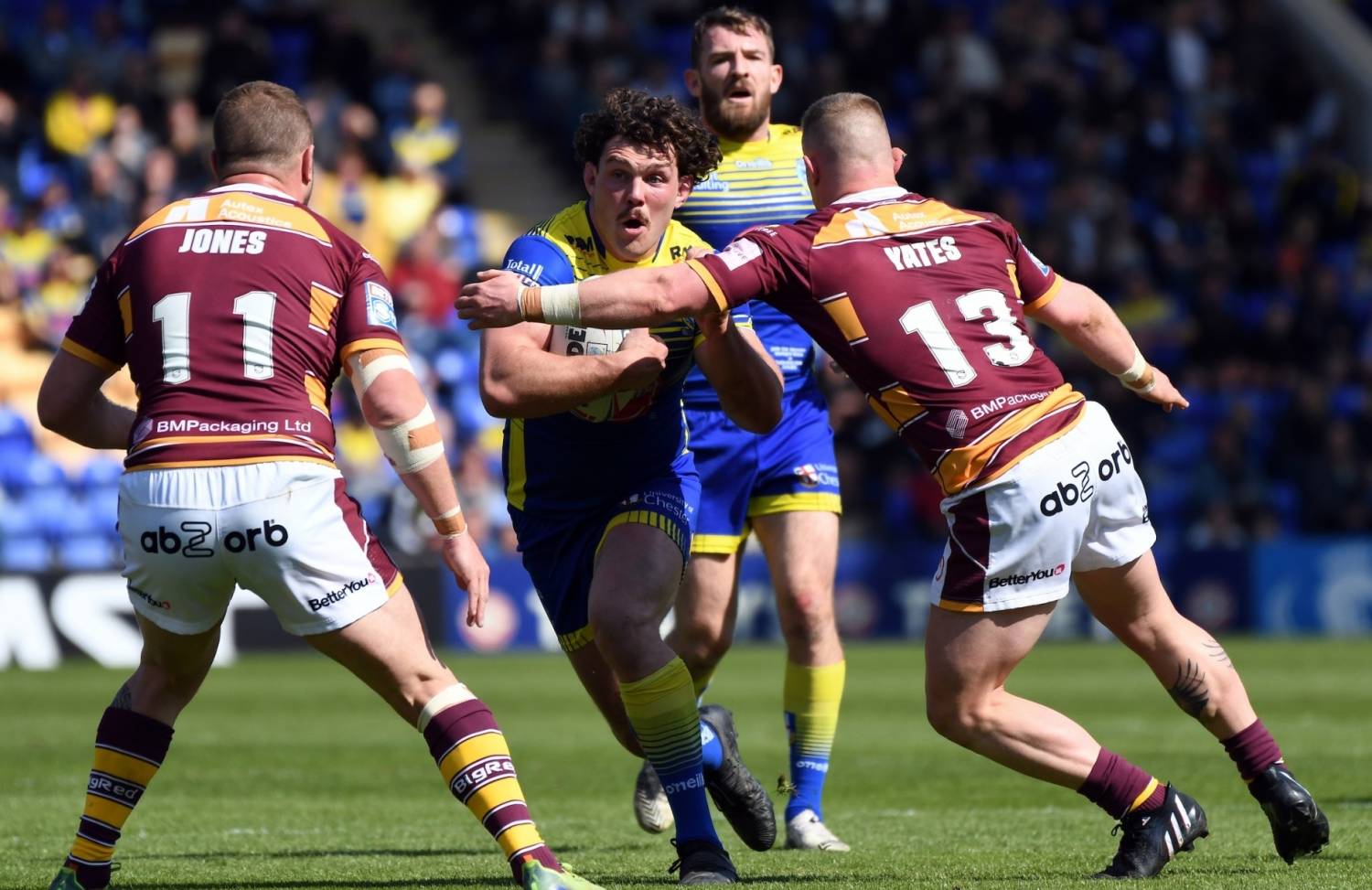 Huddersfield Giants suffered a Betfred Super League loss at the Halliwell Jones Stadium, as they were beaten 32-10 by Warrington Wolves. Ian Watson made several changes and several players returned after the Easter Period, with Chris Hill and Chris McQueen amongst the returners. Jake Wardle returned after a long lay-off, and came straight into the team at centre for Leroy Cudjoe.

Strong winds greeted the travelling Huddersfield Giants at the Halliwell Jones, and the swirling gales caused early problems for each of the back-field units for both sides, with Innes Senior catching a spinning and twirling ball hurled into the breeze by Peter Mata'utia and Warrington full-back Josh Thewlis having similar issues against the breeze from kicks from the boot of both Giants half-backs, Olly Russell and Jack Cogger.

The Giants were up against it in the opening ten minutes, as a break on the outside from Toby King created an excellent scoring opportunity for the Wire, Jack Cogger stepped in to shut down the attack, and in doing so committed a professional foul and left the Giants a man down with 8 on the clock. Warrington tried to press home an early advantage, but knocked on under the sticks on the third play of the following set.

The speed of the hosts on the outside edge threatened to cause the Giants a problem, with an identical break to the one resulting in the Giants Sin-Bin forcing the Giants to scramble, but after a kick in behind by Riley Dean, the Giants were able to collect and come away to an end an opening ten minutes where the Giants had held firm. The resistance would last until the 11th minute, however, as the hosts came through the King-Thewlis connection on the far edge once again, and crossed over for the opening try, but Dean struck the post with the attempted conversion to give the hosts a four point lead with an eighth of the game gone.

With the first quarter about to end, the Wolves broke through again and touched down courtesy of Josh Thewlis, who was able to break free of the Huddersfield defence and touchdown for his second of the game. Referee Robert Hicks awarded an eight-point try, and Jack Cogger was sin-binned for the second time in the first half. Riley Dean missed the first kick from the touchline, but dispatched the second attempt and gave the hosts a ten-point lead.

With ten minutes remaining in the first-half, the hosts would extend their lead again courtesy of Toby King, who connected with a kick into the corner from Riley Dean, who was successful with the conversion from the touchline to extend the lead to sixteen points. This would be extended to 18 points two minutes later after a 30 metre penalty from Dean was put away successfully.

It would take until 3 minutes from the end of the first half for the Giants to get on the board, with Innes Senior crossing over on the near touchline to give the Giants their first foothold on the game. Oliver Russell was unable to land the conversion, and the effect of the high winds continued at the restart, as the hosts' kick-off was blown straight into touch, then the resulting penalty for the Giants was gusted back into the field of play. Huddersfield went into the break with work to do, but glad to get their first score of the day to reduce the deficit.

Both sides were locked in an even battle for the first quarter of the second half, with Tui Lolohea creating two chances for Huddersfield that could have turned into a try: a break through the middle that the Tongan tried to finish off with a threaded kick, caught by Josh Thewlis and a break down the wing that was slightly mistimed but could have seen Jermaine McGillvary set away, but it would be the hosts who would get the first try of the second half, courtesy of Connor Wrench. Dean was unable to land the conversion, however and the eighteen point deficit was re-established.

The Giants continued to attempt to apply the pressure: with 15 left on the clock, Jermaine McGillvary thought he'd touched down to score on the back of a Jack Cogger kick, however referee Robert Hicks deemed his foot behind the touchline and the effort was scratched off, but two minutes later the hosts would touch down again, Josh Thewlis completing his hat-trick with 13 left on the clock, after a measured kick into the path of the oncoming full-back. Dean squared the conversion right in front of the posts, and the Giants found themselves 24 points down. Ben Currie would touch down as the clock next for the host, but once again Dean was unable to convert the try.

Huddersfield would finally receive something for the attacking efforts with four left on the clock, as Luke Yates would score five left of the posts. Oliver Russell got his first conversion of the day soon after, but it would be the last that the Giants would score. Next up, Wakefield Trinity next Thursday in the Betfred Super League.