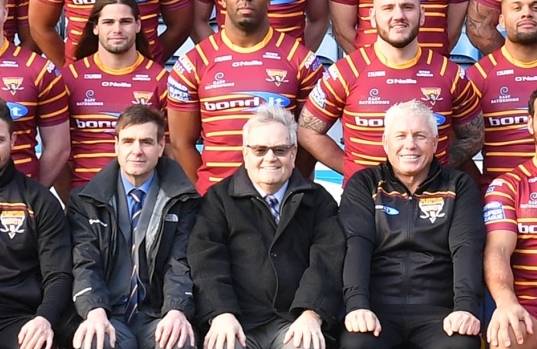 Huddersfield Giants were saddened to hear of the passing of David Meredith, of Dual Seal Glass, over the weekend.

Huddersfield Giants were saddened over the weekend to learn of the passing of David Meredith after a long battle with illness. The club has sent its condolences and sympathies to his wife Jennifer and the family.

David's first involvement with the club came via the Claret and Gold lottery way back in the late 90’s at his company Dual Seal Glass. As the club grew so did his business and it was not long before the company name became etched onto the Giants playing shirts where it has remained ever since with David and his families support being hugely appreciated by all at the club. Dual Seal Glass are the club's longest standing shirt partner and may possibly even be the game's longest.

Giants Managing Director Richard Thewlis paid tribute to the man as follows “David was simply a lovely man who enjoyed his rugby and football here at the stadium. He was very passionate about the club and you could see him lifted by wins and deflated by losses like a true supporter.

"He was instrumental way back in helping Michael De Vere come to our club and he was always available to help us all here with ideas and encouragement for the club. This year he missed more games than usual due to his health but when he could attend there was a friendly wave and smile from box 13 which was great to see even in the most trying of times. David had an infectious personality and a deep pride in our club and his involvement. He will be greatly missed by everyone here at the Huddersfield Giants”